Four years ago today we lost one of the best men I’ve ever had the privilege of knowing. 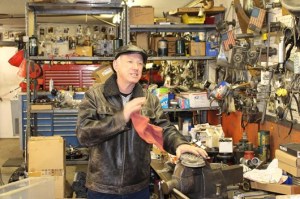 ABOVE:  Bud Reveile on 7 January 2015, a couple of months before he passed away.

Bud Reveile was a Vietnam veteran; a U.S.M.C. tanker whose story was included in Oscar E. Gilbert’s Marine Corps Tank Battles in Vietnam.  He was a devout Christian and family man, and a lifelong and benevolent member of the East Austin community.

Bud was also a dyed-in-the-wool Harley man, a walking encyclopedia of all things Harley-Davidson, and a natural-born good guy.  He could talk to anyone – Bud maintained friendships with outlaw bikers and cops, Christians and atheists, bankers and b-girls and bums – and he did his level best to treat everyone with respect.  He had very few enemies, and the only ones I ever met were only enemies because Bud wouldn’t give them something for nothing.  He was a businessman – a true old-school horse-trader who worked hard to make a buck – but Bud was honest, and in all my years of knowing him I never saw him take advantage of anyone.

Bud built his business the old-fashioned way, beginning (just like Harley and the Davidsons themselves) in a backyard shed behind his North Austin home with some tools, a small collection of used motorcycle parts, and his experience working at Harley dealerships in California and Austin.

In April of 1979 Bud moved his operations to the grounds of a defunct lumberyard in East Austin.  There a Spartan tin shack – unheated in winter, un-air-conditioned in summer, noisy and dusty all year ‘round – served as mechanic’s bay, showroom and office, while erstwhile lumber bins held his burgeoning parts inventory.

Over the following 36 years, Bud created a sprawling compound that eventually covered more than a quarter of a city block.  In a ramshackle series of structures – some built, others acquired or repurposed and all interconnected – Bud kept aisles and aisles (and piles and piles) of old and odd motorcycle parts jumbled up in glorious disarray.  There were tons of new old stock; OEM and aftermarket pieces painstakingly gathered from shops that were going out of business or dealerships purging their parts departments, stacked right alongside all the bent, broken, rusted, oil-soaked parts salvaged from a thousand different spent and clapped-out motorcycles.  There was everything a rider might need to repair an old machine, customize a new one or, for that matter, build herself one from the ground up.  Visiting Bud’s shop was like stepping back in time to those halcyon days when Harley shops were unique, one from another, instead of the prefabricated corporate clones they have become.  For those of us who care about such things, Bud’s was Disneyland!  🙂

I first met Bud in the summer of 1979, when another biker gave me one of Bud’s cards.  I had just gotten my first Harley, and wanted to learn everything I could about them.  When I saw that Bud was the real deal I quickly asked if I could become a shop hang-around.  I would come in after work and on weekends, exchanging free labor for the occasional discount motorcycle part and a far more valuable education in Harley-Davidsons.  By the fall of that year I was working there full time, and in one way or another I kept working there for the next 36 years. 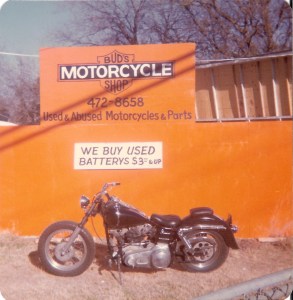 ABOVE:  My shovelhead outside Bud’s perimeter fence, fall of 1980. Over the fence are the lumber stalls, now enclosed to create mechanics’ bays downstairs and parts storage upstairs.

Jack-of-all-trades what I was, I helped build various add-ons to the shop, including closing in the old lumber stalls to create additional mechanics’ bays, and reinforcing the second story so parts could be stored there.  I ran electrical systems throughout as the business sprawled across first one, then two, and finally three separate lots known to all and sundry as 2612 East First Street.  I worked as a shop grunt, with my elbows deep in the muck of the parts washer, became a parts man and mechanic, and even lived on-site for a while during one of my periods of homelessness, doubling as night watchman while hiding my as-yet-unpaid-for shovel from the repo man. I served as publicist, writing articles about Bud and the shop for national magazines, and provided backup on the rare occasion when a situation so demanded. 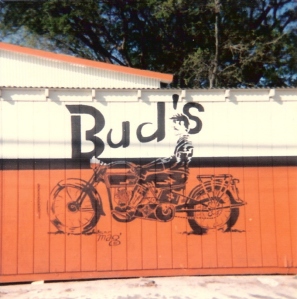 I also traveled with Bud to swap meets all over hell and gone, driving his rattletrap old school bus gutted of seats and packed full of the infamously “new, used and abused” parts that were Bud’s specialty:  everything from trendy chrome gewgaws and one-off chopper parts to hard-to-find transmissions, carburetors, flywheels and cylinder heads.  Sometimes it seemed as if we were carrying half of Bud’s inventory with us when we set out and, because Bud shopped even as he sold, frequently carried even more inventory back to Austin! 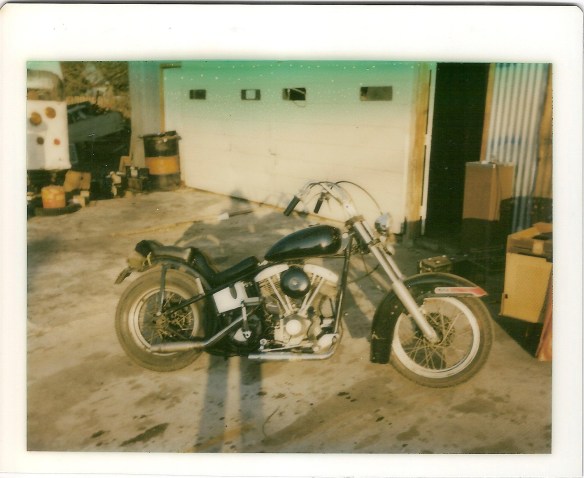 ABOVE:  My shovelhead right after I switched to a rigid frame, late 1980 or early ’81, in front of the tin shed that held Bud’s original “showroom” and mechanic’s bay.  The notorious school bus is visible at top left.

All those parts, BTW, were haphazardly stacked in rectangular metal trays, and part of my job as grunt was to hump the damn things in and out of the bus at every stop.  Bud was a “recycler” before recycling was trendy – those metal trays were actually old medicine chests salvaged from a downtown hotel slated for demolition – and when filled with panhead four-speed gears, ironhead cylinders, shovelhead connecting rods and the like they were heavy and sharp-edged enough to take off fingers!  I hated them with a passion, but even those trays couldn’t diminish the joy of traveling in Bud’s circle, meeting bikers and shop owners from around the world, learning the ins and outs of doing business the East Austin Way. 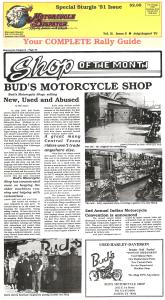 Of course, Bud also became one of my best, most reliable friends. He always seemed glad to see me, to step out and share a meal or just hole up in his cramped little office and visit for a while. There wasn’t much we couldn’t discuss, either, from faith and fear to family and friends, flatheads to Twin Cams, the war, the rallies at Sturgis and Daytona, the swap meet circuit, the biker books we both enjoyed and exchanged, and, naturally, the latest gossip from the motorcycling scene. Toward the end, we talked about what was happening to him, and steps he needed to take to be at peace as he crossed that final bridge. Like everyone who loved him, I did what I could to help, but it wasn’t enough.  If it could have done any good I’d have cheerfully given up blood, sweat and body parts to help him recover, or at least not suffer quite so much.

The day Bud died I exchanged texts with another longtime friend who had known Bud in the days when he worked at the old Harley-Davidson dealership in town. I wrote that our world just became a much smaller place. He agreed, writing “Smaller, sadder, and much more lonely.”

I miss my friend every day, but I remain grateful that he was my friend.  Through Bud I got to be part of a grand tradition in American motorcycling – the small independent shop that is the backbone of the bikers’ world.  Bud’s was a near-mystical place packed full of history disguised as scrap metal – a funky, messy mélange of mechanic and machinist’s shop, motorcycle museum and meeting hall – and it was a BLAST!  Man, I’m glad I got to be there! 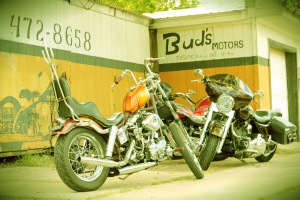